After Midnight the classic Clapton cover band began their 25th Anniversary tour in the fabulous, magnificent Georgian Theatre in Richmond with a full house eagerly awaiting a night of Eric Clapton classics. Begining with “Key to the Highway” they took command of the stage and led us through Clapton with Yardbirds, Clapton with Cream, Clapton with Derick and The Dominos and Clapton with John Mayall’s Bluesbreakers. Indeed, none stop Clapton for a whole wonderful evening.
The intimacy of the theatre allowed both audience and band to interact with the music – handclapping, cheering and  singing along with the group. Swept along with the well-known tunes the interval came all too soon.
During the interval I managed to catch up with Asia Pickup who won 2 tickets in our competition and brought her Grandma with her. Mike Hall was more than happy to have a photograph taken with her and presented her with one of their CDs as an extra treat.
The second half, which they called “Unplugged Clapton” was rather more relaxed but just as exiting and entertaining as their first session as testified by the enthusiastic cheering audience. A truly great evening from a multi-tallented band consisting of:- Mike Hall: Lead vocals and guitar, John Forster: Bass and backing vocals, Paul Warren; Keyboards and backing vocals and newest member (of 4 weeks) Neil Cochrain; Drums 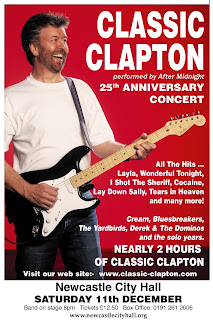 The struggle through the fog to travel from Leeds to Richmond which almost stopped us seeing this band was worth all the effort to get there. It did not seem to matter that the same fog was with us on the way home because we remembered the evening we had just so much enjoyed
Catch the website for a list of venues www.classic-clapton.com Well worth seeing!
Denis
YGG
Posted by Yorkshire Gig Guide at 16:20