An Evening at Mr Ben's 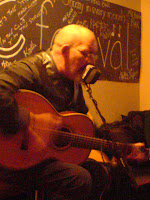 Aren't we lucky in Yorkshire having such a wealth of talent around. Eve and I popped in to Mr Ben's Saturday (14th March), to listen to the veteran Blues Singer Brendan Croker. With the relaxed laid back ease of an old hand and the passion of a believer Brendan held his mostly young audience, rhythmically attacking his twelve string guitar and sang soulfully the blues. Brendan can be found at brendancroker.com 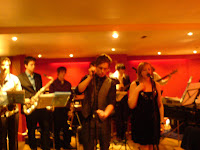 l Capacity) filled the night with powerful funky music. Robert York on guitar with snappy funky riffs, Sam Picaly on bass guitar and Nick Hobbs on drums driving the beats, with trumpet, trombone and saxophone all adding their voices, Tom Wall, Chris Coldram, Sam Houghton and 'Saxaphone Johnny'. Strong vocals powered through by Stuart Searle and Laura Popperwell. U-S-C have emerged from the leeds Music college as a new soul band, playing since September.
We will be back, a lovely evening - Andrew and Eve.

Mr Ben's is where The Mixing Tin/Trash used to be on Albion street.
And there is lots of music to be found at Mr Ben's below is just a selection, for more check out Mr Ben's MySpace page www.myspace.com/mrbensbar