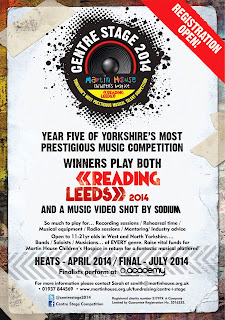 Registration for Centre Stage 2014 is now open and Martin House Children’s Hospice, together with Leeds & Reading Festivals, look forward to the new search for the act who will ultimately claim the prize of playing at next summer’s Leeds AND Reading Festivals, and a music performance video with Shot by Sodium.
The competition has gone from strength to strength since its inception in 2009 and continues to receive involvement and support from Yorkshire bands Embrace, Pigeon Detectives, The Cribs and Pulled Apart by Horses. Now in its fifth year, the Centre Stage Competition, which raises vital funds for the hospice, is inviting young bands and soloists of ANY genre to enter. Participants must be between 11- 21 years old and from North or West Yorkshire.

Over the coming months, registered acts will undertake their own fundraising for Martin House, who witness the therapeutic benefits of music first hand within the hospice. Once registered, acts will be automatically entered into the Heats, which will take place mid-late April (dates to be announced very shortly). Having been judged by a professional industry panel, the lucky finalists will take to the stage at O2 Academy, Leeds, on 23rd July, following a professional mentoring day.

The competition is just about to hit the big £150,000 mark in terms of funds raised, and all of this has been channeled directly into the care of the children and their families. Sponsorship for the year ahead has already been secured from National Breakdown and Blacks Solicitors, so Martin House are hoping that, with such support in place, CS2014 will take them close to the £200,000 mark.

Centre Stage 2013 was a great success and welcomed its first winning band from North Yorkshire, King No-One, who received an amazing reception at Leeds & Reading. The band have remained involved with the charity ever since: they even performed as 6,000 runners ran by at the Yorkshire Marathon last month, for which Martin House was a partner charity!

Almost all of the funds raised over the last year have now been received, and Centre Stage Organiser, Sarah Smith, confirms: “the total raised over the last year exceeds £45,000, and we still have some to come. We continue to be overwhelmed by the support we get, not just from the amazing contenders, but from key venues, companies and individuals, many of who volunteer their professional services, which makes the whole project possible.”

Previous winners ‘The Mexanines’ are reaping the benefits of the exposure that Centre Stage has given them as they are enjoying life on the road as the main support for the Pigeon Detectives on their current tour…. Could you now follow in their footsteps?

It’s not just about the main prize, it’s also about the platform and exposure acts receive and the fantastic prizes awarded, including a recording session with Sound People at Eiger Studio for the runners up in addition to rewards for ‘best fundraisers’ and ‘best door tallies’, but mostly it’s about YOUNG PEOPLE HELPING YOUNG PEOPLE!

Martin House Children’s Hospice: cares for children and young people, throughout Yorkshire, who have a life limiting illness. They support their families too, through the life of their child and through their bereavement. On opening in 1987, they were only the second children’s hospice in the UK. They now have an established teenage unit, Whitby Lodge, which was the first in the world to open. Martin House needs to raise almost £5m this year to run, receiving less than 12% from Government sources.

“I’d encourage everyone to get involved; it could be you playing at Leeds & Reading”
Melvin Benn – MD Festival Republic

Posted by Yorkshire Gig Guide at 14:33 No comments: