Barmmy Boy talks about his new track ‘Pack Up and Go’ an inspirational  empowering rap about Ebola that he is producing in the Studio with Hull based music producer Steve Cobby, composer and co-founder Fila Brazillia. 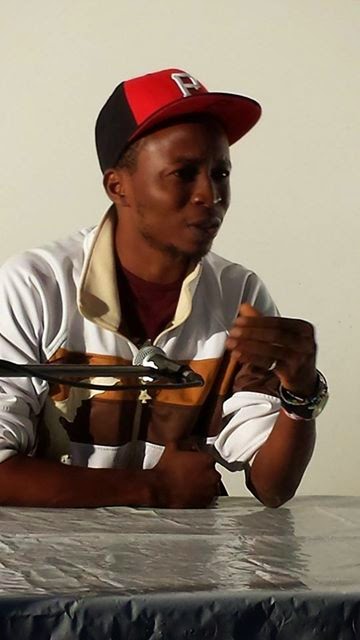 one, growing up in the crowded streets of Cockle Bay Lane, living most of his boyhood and youth through civil war and strife. After the civil war encountering music helped heal and empower Barmmy and has driven him to share its power with others.

“Ebola now is killing people really fast like happened in the Civil War and you know during the civil war there was a lot of fear in the community, most people left the country because of the fighting and it’s happening again. Flights have been stopped, people can’t get into the country, everyone is panicking you know, and people are dying- it’s like another civil war again.”

‘Pack and Go’ is about Ebola, its kinda pack and go to a new stranger. My song allows the people to address their own problems, allowing the people to actually see Ebola as a threat and saying it should go; it should be banished, it should be taken care of, it should be controlled. And people should take the necessary precautions. If people say this for themselves instead of allowing someone to tell them, control them, a key issue”

Does it frighten You? “Yes it does I’ve got my family there and I want to get back at some point I should have flown back but because of the situation I have postponed it.”
Are your family at risk? “Yes they are because all of them live in Freetown, six sisters and my mum. My mum is a petty trader and my dad is blind. Cos I live in a very congested community and hand shaking is common and as soon as you have slight fever the simplest way to check is by putting the hand in your neck and if your neck is really hot they say oh you have a fever. And because Ebola does transfer through touching- then it is a problem.”

“As soon as I’ve finished recording it Pack and Go- if it’s done in one day I’m going to send it down to Freetown Sierra Leone. I m going to put it on Facebook a lot and You Tube but mostly it’s meant for the radios to share in Freetown”

Barmmy talked about his experiences in the Civil War, “I was a young man by then caught up in the fighting and you know for a few years because I was young I moved with a group of young guys and friends who most of them I lost you know. I was around fourteen. I had an M16 for a while for a friend. I was part of a community division, at this time we had trained soldiers.”

There was a time in Freetown when a lot of people had guns so you definitely needed a gun because you don’t want someone to show up in your home and ask you for your food or you know something, and if you don’t give him, he’s going to shoot you. So most houses had a gun to defend their families and make sure intruders don’t come in and take things away.

Did you use a gun? “Not really just during the celebrations shooting and scaring you know”
“There was a point in time I was caught up in the crossfire but I didn’t get to use [a gun] cos we fall back, we had to retreat. That is where I lost most of my friends.”

“I have lived with trauma for a long time, though you know I try to cover it up, but sometimes it brings memories. Five of my best friends they have gone down in a single day and you know my sister and my younger brother; my father lost his eyesight totally so sometimes it brings back bad memories”
But also because I am alive and I can live with life, I feel motivated to move on and make a difference, cos you know I don’t even know if it was luck, I don’t really know what kept me alive. I don’t know why I am still here to keep going, moving and doing.

I left home when I was eleven, so pretty much living the street life, fishing was part of this and I had to do a lot of petty trading, selling things in the streets was a big part of my survival and also working for food.

When the war ended in Sierra Leone like many other young people music played a vital role in the trauma healing process. Like music was the driving force for a lot of young people. We used music to talk about issues affecting us in our communities. We decided to use music to talk about our social problems. “That was the same as using the guitar instead of the gun.”

“I became a music director and worked for the International Education Network- with the task to coordinate ex combat and ex fighters and of course young people who wanted to use music to talk about their problems; to talk about their experiences too in the world just to express themselves.”

They have covered many issues; HIV, Corruption, Child Abuse, Poverty all sorts of issues.
Barmmy came to Hull to work with several schools and to continue his learning about filmaking, extending his work with young people, teaching Rapping as a means to empower and telling his own stories about conflict and corruption. Barmmy Boy uses rap to make young people aware of the issues facing them in Sierra Leone.  “My songs are about issues, if I can say positive things. I see them as a voice for the young people in my own country.”

“Young people are marginalised back in Sierra Leone and the young people are the less fortunate ones, Young People make up 40% of the population. They are the pillars of the nation. If they are empowered even with the necessary information or schemes to move on, then we are talking about the development of the grassroots. Education in general would change lots of things.”

Posted by Yorkshire Gig Guide at 06:52 No comments: