Drama and music at the Battle of the Bands 2012

With the morning upon us, we arrived in Bradford to the news there had been a major incident in the vicinity of the venue and the police had closed the area. But with the initiative of Yorkshire Gig Guide Team we managed to change venue to Factory Street Studio and get the Battle Of the Bands up and running into an afternoon of fun, entertainment and strong competition. The first band up was :
Elephant stopper
Straight away this band had a great rapport with the crowd. As they had only formed as a Band in November and this was only their third time playing as a band together, you would never have guessed from their chemistry. You got the feel from them that they had known each other for years and had a fantastic feel for music of all genres. Their sense of humour shone through their act, I would say they reminded me of Madness. They had a strong ability to flow nicely from one song to another whilst still keeping to the same style of music. Each unique in their own dress sense these were an all round fun Band.
Espada
This young group was thought provoking. Their style was, to say the least, energetic in some songs mellow in others. Instrumental sections were very accomplished for such a young band.
They come from Sheffield and went to school together espadamusic@sound cloud.
Midnight Getaway.
The first of the bands to have a female member. The talented young girl did both singing and playing guitar at the same time which made this group stand out from the off. This was a group of three males and one female and it reminded me of an American teen' movie. I felt a Gothic vibe coming from these young hopefuls. I got the impression that they had not performed in front of many crowds but it was still a great attempt and they did a good job with the material they had. You can search for them Facebook, sound cloud, YouTube.
Traffic Wire.
A different style of Band. A little bit of a mismatched group made up of five males but it seemed to work well. There were three guitarists, one keyboard player and one guy on the drums. They had a fantastic opening song which really drew in the crowd. The band of five have experienced larger audiences as they have played in the Leeds O2 arena. They have also played at Limetree festival and Culture Shock which is pretty good going for these guys as they are all young teenagers. This band was very up to date in their fashion, looking very trendy they were donning some fantastic instruments too. Traffic wire, from Bramley, Bradford and Castleford were different from anything else we had heard that afternoon with each song a new sound no other band had quite the same affect with their song choices and none sounded like these guys, with all three guitarist singing the songs it will be interesting to hear their new material which they are currently working on at the moment. You can find this up and coming funky, fun group on Facebook, twitter and MySpace.
Suilvan
This band have created some exciting memories with having travelled to London, Manchester and Sheffield to promote themselves they have picked up on working the crowds and having a professional manner.
A very progressive sounding group - fresh sounding even. Although slightly familiar you can hear the uniqueness between songs. The lead singer has an ecstatic energy that fills the room with excitement. You can really feel the passion from this group and that music comes natural to them. You believe in their songs as their confidence and passion comes through their exciting sounds. The drama in the third song they play is very forthcoming as they pounded the drums with great expertise and excitement. They already have an album that you can listen to on face book and you can find them by typing suilven.music into your search engine.
One Stop Railway
One Stop Railway have been together for 18 months. They are made up of four, three males and one female. I felt an American vibe coming from the music they played and they played it well. This band had great energy, especially with their second song which was called Bones. Their first song which was about a girl who had had a bit too much to drink was sung like it was from personal experience. When the guitar string broke on the lead singers instrument the male guitar player filled the awkward silence with professionalism. This band though young are very popular locally. These are the gigs that are coming up for the young group from Huddersfield , gig 21st Aug Leeds Empire, 24th Aug Bar122 HUD, Aug 25th Keighley Arts Centre, 1st Sept Delius Bradford. And you can find them on face book -page, one stop railway.com
Thirteen Sixteen
Thirteen Sixteen were a very dark band with a lot of aggression and a great stage presence. The band was made up of three males, two on guitars and a drummer. The room really woke up when this band was on and I felt they needed a large stage to perform as their energy was very alive. They had fast rhythm and some great head banging moves. The drummer was very accomplished. They did a great cover version from the world famous band Black Sabbath. They were the only ones from all the bands to do a cover and they did it well. As the last band of the competition it was a very loud end to a great afternoon.

Once the bands had finished and had a chance to relax the judges went off to deliberate who should be crowned king of the bands, to win their spot at a recording studio for four days, to play live at Limetree festival 2013, to play at The New Conservatory on the 18 th Aug as part of the Leeds Underground Festival and a certificate certifying their winning position. After A LOT of umming and ahhhring by the judges the winners were announced. In second place was Traffic Wire who also received a four day recording session and a certificate. In first position came One Stop railway. Both groups were ecstatic but it is safe to say it was a very tough choice. But definitely well deserved. So after a long and eventful morning and the Battle almost coming to an end through cancelation, Yorkshire gig guide managed to turn it round with the enthusiasm of the bands for the day to be thoroughly entertaining and a great day to remember. I hope everyone who turned up will think the same and for those who could not make it from all of us here at YGG we hope to see you next year as it really is a truly fun and energetic experience for all.
We would like to give a massive thanks to The Factory Street Studio for opening their doors for us and providing a venue which saved the day after our difficulty of the morning. Also a big thank you to all the bands and their families and friends who were so patient whilst we were organising the change of venue.
Hannah Heaton & Jason Castle
Yorkshire Gig Guide
Posted by Yorkshire Gig Guide at 16:22 No comments:

Centrestage - A night of winners

An eager crowd gathered outside the O2 Academy with expectation of a great night hosted by Centrestage. Once the doors were opened and everyone was inside there was an electric atmosphere a buzz of exitement permeated the arena. Then the competition began in ernest as the final 12 tallented young bands took the stage to wow the Judges and the audience in the hopes of lifting the top prize of playing at Leeds and Reading Festival (August bank holiday).
The bands in order of appearence were:-
Glassbody from Allerton Grange High School
Seas-of Green from Carr Manor High School
Euthemia from Leeds College of Music
Distorted Sky from Cockburn High School
Traffic Wire from Rock School
The Scandal from Notre Dame Sixth Form 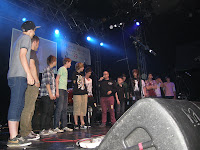 Inlaze from Outwood Grange
The Artists from Brigshaw High School
Another Life from Abbey Grange C. of E. High School
Indecisive Crisis from Prince Henry's Grammar School
Paper Plane from Crossley Heath School
British Daylight from Corpus Christi Catholic College
The night was compeered smoothly and efficiently by Alan Raw from Radio Leeds. As each band appeared on stage they were greeted by uproarious yells of encouragement (in the hopes of impressing the Judges).
After all the bands had played their sets, we were entertained by last years winners The Mexanines whilst the Judges were deliberating.
The tension mounted as we drew nearer to the anouncement of the results. Before these were given all the drummers were invited on stage and presented with certificates for their hard work in collecting funds for Martin House.
And finally the results:-
Runners up - Indecisive Crisis who receive a recording session.
The winners - Glassbody who will now be playing at Leeds and Reading festival plus recording time and £1,000 worth of equipment.
So we come to the  end of another exiting year of the Centre Stage competition which on the night raised £25,000 for Martin House Children's Hospice.
Looking forward to next year's competition. Well done to all those who took part.
Denis
Yorkshire Gig Guide


Posted by Yorkshire Gig Guide at 14:55 No comments: 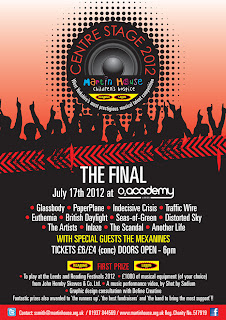 Back in April, Martin House Children’s Hospice held their third, annual Centre Stage Heats at The Wardrobe, Leeds. Over a thousand people came down to support over thirty local, young bands and artists who battled it out to earn themselves a place at July’s Final, where they will compete for a place on the bill at both the Leeds and Reading Festivals this summer.
The Final is now looming and very eagerly anticipated, and is set to take place on 17th July 2012 at O2 Academy, Leeds. The event will see a diverse range of acts, from as young as twelve years old, and will be judged by a very high profile panel, including Neil Pengelly (Booker for Leeds and Reading), Mike Heaton (Embrace), Jeremy Lascelles (Former Virgin A&R Manager/ CEO Chrysalis Music), Ross Jarman (The Cribs) and Matt Bowman (Pigeon Detectives).

The Judges at the heats had such a difficult time choosing the winners to go forward to the final. It should be a brilliant night of wonderful music. Come and support your favourite band and cheer them on and at the same time you will be supporting Martin House Children's Hospice.
Denis
Yorkshire Gig Guide.
Posted by Yorkshire Gig Guide at 09:04 No comments: