Posted by Yorkshire Gig Guide at 06:46 No comments:

Dear Yorkshire Gig Guide… but February nights don’t have to be gloomy! Why not come and warm your cockles (and anything else you want) at our Seven Jazz gigs at Seven Arts Leeds? Two evening highlights to choose from this month – acclaimed pianist Zoe Rahman with her “Kindred Spirits” group on 2nd February and guitarist Jim Mullen’s Reunion Band who will be visiting Seven Arts on 16th February. Our Sunday afternoon gigs also offer you everything from seven piece Cuban Band “Yoruba”, top jazz vocalist Nikki Allen with her sextet, pianist Dave Evans and his mercurial Fruit Tree band and contemporary jazz from saxman Russell Van den Burgh and drummer Darren Altman’s and their band “Centreline”. But to start with this coming Sunday…

This is a free improvising acoustic trio on the cutting edge of British Jazz. The language they use mixes popular, folk and art music from all over the world. Corey Mwemba is a vibes player who as well as having made four electro-acoustic albums, is on two albums made by Quantic, one by Arun Ghosh and one by Ty. Dave Kane is a Leeds based double bass player and composer who had been feted for his work with pianist Matthew Bourne and Stephen Davis and has a fantastic duo with the trumpeter Alex Bonney which performed with Ken Vandermark in 2008. Alexander Hawkins is a pianist who mines a rich vein from the free jazz seam, mixing music from Steve Lacy, Roscoe Mitchell, Dudu Pukwana and Ornette Coleman with his own compositions.  "absorbing, intriguing and at times downright exhilarating music" ~ Vortex Jazz Reviews. Listen at http://trio.coreymwamba.co.uk/ £5/4 concessions, kids under 16 free, doors open at 1pm, music 1.30-4pm

Zoe Rahman piano, Idris Rahman clarinet, US drummer Gene Calderazzo and bassist Davide Mantovani (picture of Zoe at Seven Arts taken by Phil Songa). Our second evening concert of the season will be stunning – it features the popular and highly acclaimed pianist Zoe Rahman. Zoe shot to wider public awareness when her luminous album Melting Pot was nominated for the 2006 Mercury Music Prize. She returns to Seven with her fifth album Kindred Spirits, part of an extensive UK tour. Released on 23 January on her own Manushi label the music continues her vibrant exploration her English, Irish and Bengali heritage combined with her sparkling contemporary piano work and framed by her strong melodic composing style. Her brother Idris (best known for his own groove-heavy band Soothsayers) joins her on clarinet alongside her fine regular rhythm section of London-based US drummer Gene Calderazzo and bassist Davide Mantovani. Do book early -this will be popular. Tickets £15/12 concessions in advance from Seven Arts 0113 26 26 777 or on the door. Stand by tickets for full time students are £5 on the door only. Doors open 8pm for the concert, music is 8.30-11pm.

Nicki Allan Vocals, Joel Purnell Tenor Sax, Mark Chandler Flugel/Trumpet, Graham Hearn, Adrian Knowles Double Bass, Ronnie Bottomley Drums. Nicki Allan is back in Leeds at Seven Arts by popular demand for another round of hot arrangements from her legendary sextet. With a new album under her belt (You're gonna hear from me - 33 Records) she will sing some new songs, some original and standard favourites but always with the classic stamp of unique brass and syncopated jazz to flavour them.  £5/4 concessions, kids under 16 free, doors open at 1pm, music 1.30-4pm

Greg Nichols trumpet, Ben Lowman alto sax, John Waugh tenor saxophone, Aron Kyne piano, Sam Vicary bass guitar, Ali Mac percussion, Tim Carter drums (photo taken at Seven Arts by Tom Swire). Pianist/composer Aron Kyne was been awarded Jazz Futures funding by Jazz Yorkshire to help him develop as a jazz musician here in Yorkshire. Anyone who saw Yoruba at Seven in June last year will understand how well deserved that award was. The jazz/salsa/fusion band are back united by their love for high-energy Salsa and Jazz. Yoruba are a powerful 8-piece band intent on producing a tight driving sound. Led by Aron and comprising of some of the hottest young talent from around the Leeds area this band draws together a diverse mix of influences. They have created their own fusion of Jazz-Salsa-Samba, blending beautiful harmonies with syncopated rhythms, killer solos with a massive horn section sound. £5/4 concessions, kids under 16 free, doors open at 1pm, music 1.30-4pm

Jim Mullen guitar, Gareth Williams piano, Mick Hutton bass, Gary Husband drums. This, our third evening concert came about from a conversation between Seven Jazz, Sheffield Jazz and bassist Mick Hutton. The result was the reunion of a Quartet that was in existence for six years from 1996 and was one of the most powerful and exciting bands ever to appear on the UK Jazz Scene. It's members are amongst the most experienced jazz musicians in the country and  the group developed an extremely powerful musical identity. They recorded five cds: We Go Back (1996), Live In Glasgow (1997), Burns (2000), Animation (2001), Somewhere In The Hills (2002). Now reformed for this two-week tour the band will be playing a mixture of new music specially written for the tour and some of their older repertoire. Again do book early- this will be a popular gig. Tickets £15/12 concessions in advance from Seven Arts 0113 26 26 777 or on the door. Stand by tickets for full time students are £5 on the door only. Doors open 8pm for the concert, music is 8.30-11pm.

Dave Evans piano, Kenny Higgins bass, Alex Wibrew drums. Fruit Tree are favourites of the Seven Jazz audience led by the skilled and energetic pianist (and Garforth Festival organiser) Dave Evans. They take on grooves and at times semi-free excitement equally to create a thrilling array of sounds. Tart and sweet by turn, but never syrupy, you’re enticed to taste and enjoy. Real jazz original - all their tunes are composed by Dave Evans and arranged with the band. £5/4 concessions, kids under 16 free, doors open at 1pm, music 1.30-4pm

Jazz Yorkshire’s 2012 jazz awards will be held on March 19th at Dean Clough. If you like Seven Jazz or any of the artists you have seen over the past year,  then please do take a little time to say so by adding your vote before 19 February… the link is http://www.jazzyorkshire.org/awards/

For all details of all our events and latest news updates see us on www.sevenjazz.co.uk, follow us on Twitter or befriend us on Facebook. Look forward to seeing you soon at Seven Arts, 31 Harrogate Road, Leeds LS3 3PD 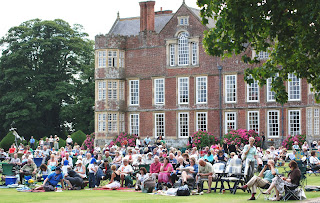 The Burton Agnes Jazz and Blues Festival returns for its sixth year set in the award winning grounds and Elizabethan Hall of Burton Agnes, East Yorkshire, YO25 4NB. Organised by the Hall’s sax-playing owner, Simon Cunliffe-Lister, the festival runs over three days showcasing some of the UK’s hottest jazz and blues acts in the most stunning and serene of surroundings.

“Possibly the most enjoyable jazz concert I've ever attended.” The Independent

Grammy nominated and multi award winning Stacey Kent, including the British Jazz Award and BBC Jazz Award for 'Best Vocalist', is a sublime singer, rightly famed for her peerless interpretations of the Great American Songbook, but equally adept singing in French or Portuguese. Her beautiful tone and wonderful phrasing bring a fresh beauty to everything she sings and she sings from the soul. She tells us her stories with faultless phrasing and a lucid, enchanting voice and it is her beautiful version of Hushabye Mountain that has bewitched TV viewers on the recent Dreams Bed campaign. After eight studio albums, her current album Dreamer In Concert is her first live album and the first album that captures her magical onstage persona.
Burton Agnes Jazz and Blues Festival are delighted to announce that Stacey will headline their festival on the main stage - Saturday 7th July.

"Stacey Kent is a revelation. There is nobody singing today who can compare with her. She has the style of the greats, like Billie Holiday and Ella Fitzgerald. And she sings the words like Nat Cole - clean, clear and almost conversational with perfect phrasing. And that's as good as it gets." Three-time Oscar-winning songwriter, Jay Livingston
"Devastatingly stylish...a beauty in any circumstances" The Observer
"A delight" The Guardian

More artists are to be confirmed over the coming weeks.

Held over three days, with performances both inside the stately Elizabethan Hall and outside in the Hall’s beautiful grounds, the Burton Agnes Jazz & Blues festival presents a varied line up of funk, traditional jazz, hard blues, dreamy vocals and everything in between.

The main stage on the lawn hosts the festival’s headline acts. With rolling fields behind and pristine woodland to the side, you couldn’t ask for a more stunning setting for some of the UK’s top Jazz and Blues artists to perform. Inside the Hall, intimate acoustic performances mix with original Elizabethan carvings and French Impressionist art to create an inimitable festival experience.
On Friday and Saturday evening the Wolds Top beer tent plays host to the Beverley Arts Trust’s late night sessions of folk, jazz and rhythm ‘n’ blues.

Local food and drink feature heavily at the festival. At the tea tent and food lawn, festivalgoers can indulge in home-baked treats, barbecued local meats, freshly prepared curries, and salads grown in the neighbouring walled garden. In the beer tent award winning Wold Top beer is on tap, brewed just five miles away from the festival site.

A campsite in the field adjacent to the Hall offers welcome hot showers and panoramic views of the Yorkshire Wolds for those wishing to pitch a tent for a night or the whole weekend.

Burton Agnes Jazz & Blues Festival welcomes families of all ages with its safe, easy-going vibe. There is plenty on offer for children including a Children’s Corner with play area, 15 acres of magical gardens to explore including a walled garden with maze, jungle garden and giant games and a woodland walk with forest creatures to find. Free face painting and balloon artistry caps off the entertainment.

Built between 1598 and 1610 by Sir Henry Griffith, Burton Agnes Hall is an Elizabethan stately home that has stayed within the Cunliffe-Lister family for more than four hundred years. Fifteen generations have filled the Hall with treasures, from magnificent carvings commissioned when the Hall was built to French impressionist paintings, contemporary furniture, tapestries and other modern artwork in recent years.
The charm of the house is that it is clearly a loved and lived in home and visitors are welcomed openly by the family in joining them to spend many enjoyable hours at Burton Agnes Hall.

‘Burton Agnes Hall ranks among the finest, and best presented, houses in England.  It is the perfect English house, embodying the climax of the final great age of domestic architecture’
Simon Jenkins, Chairman of the National Trust, journalist and author of England's Thousand Best Houses