A New Year and another Superband 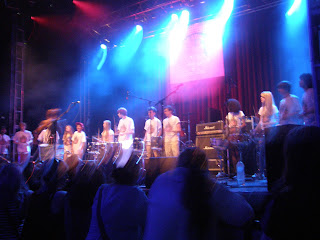 An amazing start to the Centre Stage Final as 18 Rockschool drummers took the stage and gave a tremendous performance of their talents ably conducted by Isaac Haywood. Then to a crescendo of noise last years winners Glassbody joined them on stage soon to be followed by the contestants:- 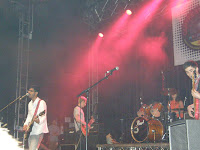 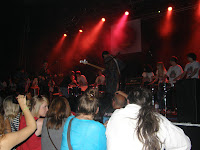 Icarus, Jacobean Ruff, Roman Bison, The Imports, Headwire, Pony & Trap, Amazing Scuba Divers, The Puppeteers, King No-One, Quentin's Basement and  Yo Preston who entertained us for the next 2 hours all hoping to claim the prize to play at Leeds and Reading Festival 2013. All these young bands have raised over £1000 each for Martin House Children's Hospice 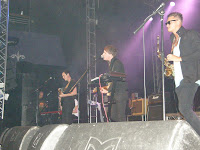 During the interval, whilst the Judges made their deliberations The Mexanines (winners 2011) gave a special performance with their new line-up. Eventually the results were in and all the bands were waiting with baited breath until  they were announced.
The Runners up were Jacobean Ruff
The Winners were King No-One who received their certificate to a roar of approval from the audience.
Centre Stage registration for 2014 is open in September 2013.
We will let you know how much was collected for Martin House when all the money has been collect 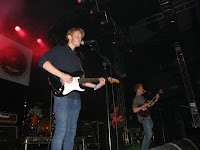 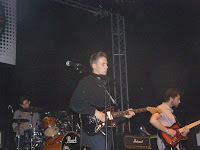 We wish all the entrants well as they clearly all have a great future and Congratulations yet again to King No-One. We are already looking forward to next years competition.
Denis
Yorkshire Gig Guide


Posted by Yorkshire Gig Guide at 16:13 No comments:

Back in April, Martin House Children’s Hospice held their fourth, annual Centre Stage Heats at The Wardrobe, Leeds. Over a thousand people came down to support almost thirty local, young bands and artists who battled it out to earn themselves a place at this month’s Final, where they will compete for a place on the bill at both the Leeds and Reading Festivals this August.

The Final is now looming and very eagerly anticipated, and is set to take place on Wednesday 17th July 2013 at O2 Academy, Leeds. The event will see their most diverse range of contenders to date, and will be judged by a high profile panel, including Jon McIldowie (Booker for Leeds and Reading), Mike Heaton (Embrace) and Colin Oliver (Futuresound).

The evening will be hosted by BBC Introducing’s Alan Raw, who will also be introducing the winners when they take to the stage at the Leeds Festival.

The lucky finalists are: Icarus, Roman Bison, The Puppeteers, Yo Preston, Pony and Trap, Headwire, Jacobean Ruff, King No-One, The Amazing Scuba Divers, The Imports and Quentin’s Basement - all fine examples of young people utterly dedicated to performing music that they are so passionate about. Glassbody (2012’s winners) and The Mexanines (2011’s winners) will also be performing as special guests.

Since securing their places as finalists, the bands have been taking this opportunity very seriously – upping their rehearsal times, writing new material and getting lots of gigging practice. Not to mention continuing to fundraise and help raise the profile of the competition. As preparation for the final, Martin House organised professional mentor sessions at Old Chapel Studios, to answer any last minute questions and to deliver some constructive advice for their big performance.

Last year’s final saw over 1300 music fans support the bands and Martin House and this year looks set to attract an even bigger crowd! Tickets available now on O2 Academy, Leeds, website, only £6.50/£4.50 concessions. People are also welcome to pay on the door. Doors open and 6pm and the event will kick off just before 7pm.

Fantastic prizes also awarded to ‘the best fundraisers’, ‘the runners up’ and ‘the act to bring the most support’. Blacks Solicitors are assisting with sponsorship for the event.

Centre Stage Background: The premise of the Centre Stage competition is to give young bands a fantastic platform, exposure and once in a lifetime opportunity whilst raising vital funds for Martin House Children’s Hospice. In 2009, this new Martin House fundraising initiative was conceived: a musical talent competition, which would invite all secondary schools and colleges in West Yorkshire to take part and ultimately enter their most gifted musical talent. Since its initial launch, by The Pigeon Detectives in Autumn 2009, Centre Stage has so far provided a platform for over 130 young musical acts in West and North Yorkshire and raised over £130,000 for Martin House Children’s Hospice. The competition has the support of Embrace, The Pigeon Detectives, The Cribs and Festival Republic.

In order to enter, artists must be under 21 years old and in North or West Yorkshire. To put themselves forward for this fantastic opportunity, artists/bands commit to undertake their own fundraising ventures and raise vital funds for the hospice: to care for children and young adults, with life limiting illnesses. The perfect example of young people helping young people.

Martin House Children’s Hospice: Martin House Children’s Hospice cares for children and young people, throughout Yorkshire, who have a life limiting illness. They support their families too, through the life of their child and through their bereavement. On opening in 1987, they were only the second children’s hospice in the UK. They now have an established teenage unit, Whitby Lodge, which was the first in the world to open. Martin House needs to raise almost £5m this year to run, receiving less than 12% from Government sources.

Posted by Yorkshire Gig Guide at 10:03 No comments: