Band Skills for children on the Autism Spectrum

Many young people with Apserger’s have difficulty expressing their emotions and understanding the emotions of others, sometimes young people with Apserger’s find it difficult to be in social situations. This group is specifically for young people with Asperger’s and it is our hope that the young people who attend will have more social confidence and will have new ways of expressing themselves.
This group will run for 3 days, the 26th, 27th and 28th October from 10am-5pm, by the end of which the young people will have formed a band, learned to play an instrument and will have their song professionally recorded and copied on to a CD.
The group will be a closed group for young people aged 8-16 with Asperger’s or young people with a social-emotional delay.
Some broad aims for the group beyond the musical aspects are: increase confidence, find new ways to express emotions, be better able to understand other’s emotions and to increase social awareness and social skills.
The staff who run the group are all experienced both in running groups for young people as well as music and are all CRB checked.
Young people need a basic level of interest in music and an ability to play or sing a bit, the more the better.
For more information contact Amy on 01274 682125


Posted by Yorkshire Gig Guide at 05:29 No comments:

Crown of Lights BAND NIGHT will definitely be one you won't want to miss!

The October BAND NIGHT will definitely be one you won't want to miss! There is something for everyone with an eclectic lineup of mighty bands and artists from near and far. Here's the details....

First up for the bands will be rising stars ALICE AT LAST from Wakefield. This four piece indie / rock outfit are currently wowing crowds around Yorkshire with their very catchy, finely crafted tunes and energetic live performances. Fronted by the massively talented Lucas Smith who has played our Acoustic Night previously, this band is without doubt one to watch.

The next band is a very special treat indeed. The enigmatic HEAD OF LIGHT ENTERTAINMENT will be travelling all the way from Teesside to be with us, and will feature on bass one of my bestest buddys from Music College all those years ago (well, not that many!!). John Taylor is part of North East Live who organise and promote gigs around the North East (so any band/artist fancying a trip up there could come and have a word in his shell like!). This very unique trio has been referred to as the New Avengers of left-field pop and can only be described as...well, indescribably entertaining!! Bring a change of underwear - anything could happen !!

Closing the night will be the magnificent dirty blues rock of THE BLIND DEAD MCJONES BAND. Blessed with limitless talent and moving effortlessly from down and dirty authentic blues, to hard hitting rock, this is genuinely one of the most entertaining bands you are likely to see.

Playing between the bands will be the very gifted SCOTT ANTHONY WAINWRIGHT. This incredible and very entertaining acoustic artist refuses to be pigeon-holed with his current work being a fusion of Blues, Hip Hop, Folk, Country and Gospel Styles all mashed together in an Avant Garde manner to present a sound that Scott titles ‘Rural Underground’.

So, altogether a night certainly not to be missed, all in the fantastic, friendly surroundings of the Comrades Club in the centre of Heckmondwike. We always have a great night so come on down and join the fun. The beer is cheap and entry is, as usual, FREE, yes FREE I tells yer!! 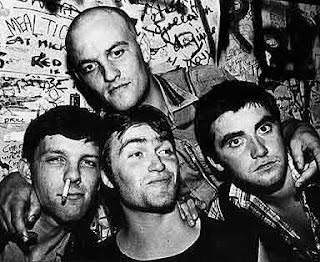 When I was a kid I was terrified of punks and skinheads. Angry, scary looking young men and women in strange clothes who played loud aggressive music and did amazing things with their hair. Having grown up and grown to love punk music it depresses me that our society has perpetrated the myth that punks and skins are ‘troublesome’ and something to be feared. Having involved myself in this scene, albeit only briefly over the years it is clear that members of these social groups are some of the nicest, most decent human beings I have ever met. And therein lies the paradox of punk rock: it is aggressive and angry whilst at the same time being incredibly positive and friendly. Audiences are shouted at rather than sung to, the lyrics are aggressive and demanding and the dancing could easily be mistaken for fighting by the uninitiated. Yet beneath this dark veneer sits the liberal beating heart of punk. It is joyous, triumphant, righteous, honourable, polite, positive, friendly and built on a shared sense of togetherness.
The second Rage Against Racism gig at The Well beautifully demonstrated these traits yet again. What an atmosphere, probably twice the attendance of the last R.A.R. gig resulting in twice the joy. I must confess I arrived late to this one due to decorating duties and so missed the first few acts. I was however given an enthusiastic impromptu review by Skank Agenda’s Alex, Nick and Mickey which included the phrases “nice cheeky bit of sax” and “The Vexed were outstanding”. I arrived just in time to see the end of Overspill’s set and was immediately gutted i’d missed the rest of it. Huge amount of positive energy and an already buoyant crowd lost in the cacophony of exciting noise that Overspill produced. Lowlife UK carried on this vibe with a great set, I really love these guys and their brand of bouncy, lively punk really got the crowd going. Superb.
Geoffrey Oicott were a pleasant surprise, I must confess to being a tad underwhelmed at the thought of a cricket-themed oi band but they were great, as were Jock Sparra whose lead singer seemed to be having the best time in front of that crowd. To see a band and a singer clearly revelling in the moment like this is a beautiful thing indeed. Next up to bat were Oi Polloi who again played a great politically charged set and had the crowd entirely rapt throughout. Lovely guitar work too.
The cumulative effect of all these bands felt like being punched in the face repeatedly by a super cheerful clown on speed wearing marshmallow boxing gloves: exhilarating but exhausting. The headline act Angelic Upstarts proved to be the perfect antidote to this and delivered a storming set to a now packed room, the audience literally bouncing off each other in appreciation of one of the UK skinhead scenes greatest.
I must apologise to The Autonomads, Bus Station Loonies, Keyside Strike and Paul Carter for not getting to see you guys but from the atmosphere and positive energy around the place it’s clear there were no weak links in this line up. All in all a fantastic day of music and credit must go to Stevie Caldwell for putting on yet another great day in the name of anti fascists, anti racists and thoroughly decent punks and skins everywhere. Wonderful.
Nick Hart
Yorkshire Gig Guide
Posted by Yorkshire Gig Guide at 16:39 1 comment: