Promised Land at the Carriageworks - Review 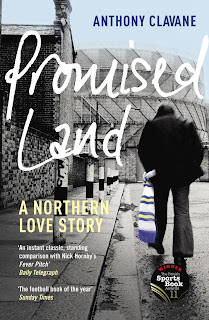 Alison and I spent an interesting Monday evening at The Carriageworks Theatre in Leeds watching a musical production of The Promised Land by Anthony Clavane. A thought provoking and funny play deftly directed by Rod Dixon and  skilfully portrayed by the Red Ladder cast. The play is set in two time-zones juxtaposed with each other - the turn of the last century and the 1970s in Leeds. Both periods had influxes of immigrants and the play demonstrates how these new people helped to shape the way Leeds is today  Familiar people and places within the city's urban landscape are part of the dialogue that any Leeds born could not fail to recognise - Roundhay Park, Chapeltown, Hepworths Clothing, Kirkgate Market to name but a few
Excellent stage settings by Kelly Jago transported us backwards in time then brought the audience forward to  the terraces of heyday Elland Road , sharing the highs and lows of both eras interlaced with original music and northern humour.
Through this journey the audience is introduced to many different characters from the sweat shops of old Leeds to the terraces of Leeds United all trying to integrate into a society which they have recently joined. Along the way, Nathan (played by Paul Fox) - from a Jewish family - becomes involved with Caitlin (played by Lynsey Jones) - from an Irish Catholic background, who is a political activist of the kind that were so very prevalent during the 1970s, and a romance begins to blossom with all it's inherent difficulties.
To find out how everything works out for Nathan and Caitlin take advantage of the opportunity to visit The Carriageworks this week to watch this thoroughly thought provoking and often amusing play ably portrayed by the multi-talented cast deftly directed by Rod Dixon with music orchestrated by Beccy Owen and superbly choreographed by Pauline Mayers. The timing by the cast was superb and made this play one to watch. Congratulations and well done to The Red Ladder Company for this production.Running to 30 June 2012
Denis Heaton
Yorkshire Gig Guide

Posted by Yorkshire Gig Guide at 12:31 No comments:


From the opening of the weekend with the children of  Longcroft School and Steeleye Span to the closing on Sunday with Joe Brown the weekend  transcended the wet and mud with a wealth of wonderful music.
Throughout the weekend the Yorkshire Gig Guide team was out and about capturing the flavour of Beverley Festival in film, photographs and interviews with the bands.

Harry Priestman had done a wonderful job encouraging and teaching the local children in the upper years of Longcroft School and they performed songs they had written in their workshop with him.  Jessica Lawson, Lady Maisery and Steeleye Span followed in style and the festival was well and truly opened.

Saturday brought workshops - including harmony singing, melodeon workshop, storytelling and Danish music. There was  poetry, a moving poignant  talk about his work by writer Ian Clayton and tea time dancing with Elfynn. There were outdoor performances - between the showers - in the Festival Village from Morris Dancers, clog dancing, wandering players and many, many more throughout the weekend.

Area 2 presented a wonderful selection of young, up and coming artists all showcasing their various talents at different times during the Festival. This was a favourite place for the gig guide team.
Andrew and Denis managed to catch the World Goes Local concert featuring Humba Rumba, Hope Choir and Kingston Allstars. At this time Eve and Alison interviewed some of the young people who attend the local high school and volunteer to work at the Festival during the weekend. And of course the team met up for tea and cake in the Cafe Vibe in the leisure complex and shared their stories of the festival so far.

After refreshments, Alison caught up with the wild west in the American Concert featuring The Carrivick Sisters, The Tom Townsend Blues Band and The Toy Hearts all playing blues and blue grass music. A pleasant afternoon spent in their company.

Once we had sampled the catering round the Festival Village, Eve went to see the Peatbog Faeries in the Main Hall, Andrew and Denis went to see The Sail Pattern in the Area 2 Mid Summer Concert. Alison - not a late night party girl - went to bed!

Sunday woke up bright and clear. The rain seemed to have passed and the ground was drying out. Denis and Alison planned to go to the folk service at St Nicholas's Church. However when they tried to drive the car out of the car-park they became totally stuck in the mud! By the time they had been rescued the service was half finished so every cloud having a silver lining - so it is said - they were able to watch The Alligators who were an unusual choice at 10.30 in the morning but woke us all up with their rousing rhythm and blues.

Eve decided to take up a roving role for the rest of the day, sampling the various performances around the site and town. Meanwhile Denis and Andrew caught up with the jammin session  led by Broken Underground outside the sessions tent. Very soon Andrew had managed to borrow a guitar and took great pleasure in taking part along with those other people who joined them.

All too soon we were coming to the end with final concerts. Eve and Andrew visited the Festival Farewell Party and dropped in to the Area 2 Finale whilst Denis and Alison had the privilege of going to see The Finale Concert including Furnace Mountain and of course Joe Brown. A great ending to a wonderful festival.

The Festival could not have worked without the very hard work of the Festival organisers, the cheerful and willing volunteers, the long-suffering staff at the leisure centre and all the magnificent artists - young and old.
Thank you one and all. Hope to see you all again next year.
Denis Heaton
Yorkshire Gig Guide 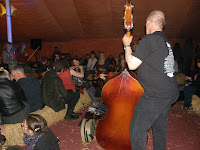 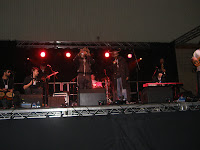 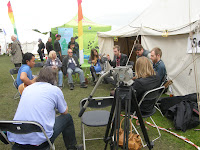 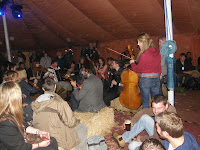 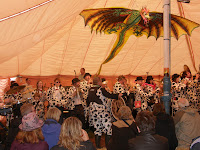 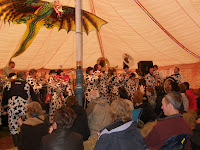 A small selection of the entertainment this weekend
Posted by Yorkshire Gig Guide at 14:59 No comments: