Loot at The Hull Truck Theatre 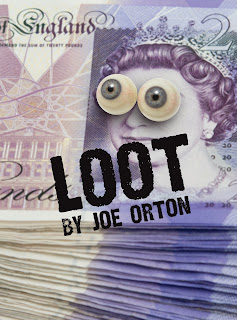 A controversial dark comedy when it first appeared in 1965 by the then New Playwright Joe Orton, Loot arrives for the first time at the Hull Truck Theatre deftly guided by Director Gareth Tudor Price, and after Tuesdays witty and hilarious performance should be drawing audiences in from near and far.

Loot ostensibly refers to the money stolen and hidden by Hal, played as the wayward son and wide boy young criminal by Tom Hudson, and his mate Dennis, depicted convincingly as a young con man villain by Karl Dobby. But as the plot and sub plots twist and turn and the play develops, the characters witty dialogue and farcical actions transform Loots meaning spreading it out to absorb the alliance of corruption, greed and lust as the play lampoons expectations and acceptance of authority and sexual morality.

And it is all acted out on the day of Mrs McLeavy’s funeral and in the front room of Mr McLeavy’s house with the coffin centre stage. Mr McLeavy is wonderfully portrayed by Gary Li 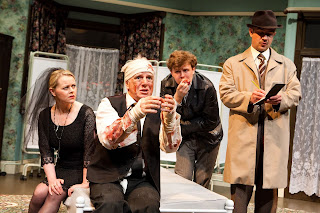 lburn as the naively innocent, upstanding citizen unwittingly and hilariously caught up in events.

Meanwhile Nurse Fay, played vampishly by Linzi Matthews, a seductive and murderous nurse has conniving designs on Mr McLeavy. Hal and Dennis meanwhile, have hidden the money and body in unexpected places. Enter Inspector Truscott of the Met to add to the already farcical and very funny chaos. Inspector Truscott’s bungling obsessed and corrupted character is brought raucously to life by Chris Connel. Inspector Truscott is ably helped by the uniformed PC Meadows portrayed as innocently absorbing the induction of police corruption by Josh Meredith.

Deliberately portrayed in the plays original 1960’s the stage setting and costumes designed by Richard Foxton and built by Graham Kirk helped create an atmosphere and ambience of sixties England whilst design and layout allowed the action to seamlessly unfold on stage.

Keeping a very sixties set and ambience had the interesting effect of juxtaposing the sixties attitudes and perspectives against that of a modern audiences values and morality. Yet Gareth Tudor Price’s direction holds the contrast well, in current times the integrity of politicians and institutions such as the police and church are under scrutiny. Loot mocks and harpoons deeply held values and The Hull Truck Theatre’s presentation succeeds in its claim to make “the popular challenging and the challenging popular”.

Tuesday’s audience was perhaps inured of some of the controversy in Loot. There was little obvious reaction to some of the sexual and religious contentious statements, but there were two revealing occasions where the play drew audible gasps from the audience. The first was from the unexpected violent scene of police brutality by Inspector Truscott realistically choreographed by Ian Stapleton. The second was the quip by Inspector Truscott on the intelligence of women which got a discernible ripple of dissent across the audience.

The most important thing to say about this play is it is funny- very funny, it had the audience deep belly laughing infectiously throughout with its fast moving slap stick dark humour and witty dialogue that twisted through a clever plot to a pleasingly surprising ending. I enjoyed this production by the Hull Truck Theatre.

Posted by Yorkshire Gig Guide at 14:09 No comments: